I saw this in the drugstore the other day and was surprised because previously I hadn’t heard a single thing about it. Usually when a new mascara arrives on the market its all over blogs and YouTube within a week. The package claimed 12x the volume, so I decided to put it to the test and grabbed the waterproof version. 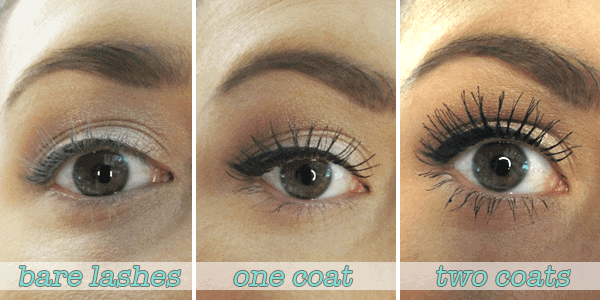 Maybelline Pumped Up Mascara is part of the Colossal/Volume Express line, which I have always had good experiences with (I love the original waterproof Colossal in the yellow tube, and have had good luck with The Falsies and One by One). I didn’t think twice about snatching it up when I saw the display, knowing Maybelline very rarely steers me wrong when it comes to lashes.

The wand (as seen in the inset above) is a traditional bristle brush which pleased me, it seems so many new mascaras are going for rubber wands. It’s a cone shape, which is quite plump at one end. Normally I would like something tapered a bit, which would make it a bit easier to into those inner corner lashes, but in this case I found the fat end of the brush made it hard to deposit product on my lashes, leaving me wiggling and zig zagging and combing over and over for each coat to get mascara on my lashes. The formula is very dry, which normally I like, but this just didn’t want to get on my lashes!

You can see the comparison in the picture above between one and two coats, and I can say that those were both very generous coats to get that look.
Does this mascara live up to the claim of 12x volume? Heck no. I’ve had way better volume with the original Colossal which doesn’t make nearly the outrageous claim. I really had to work with the brush to make this mascara do much for me, making it not a great choice for when you are in a rush. It also wilted the curl slightly in my lashes and left some minor flaking by the end of the day.

All in all I wouldn’t say it was a bad mascara per se, it just isn’t what they market it as, which is supposedly volumizing. I would say it’s more of a natural look and does leave the lashes quite soft which is a plus for a waterproof formula, it’s just not something I would repurchase.

Sorry Maybelline, you let me down with this one! If you are looking for a great thickening mascara that holds a curl and doesn’t take a ton of effort to work, I suggest the waterproof Colossal mascara from this range, which I love to layer over lengthening mascaras for extra oomph!

RECENTLY ON THE BLOG

5 Reasons Why Your Makeup Looks Terrible

Hello! I'm Jaime, and I may or may not have a personal goal to try every mascara ever made. It's an illness I tell you.  I am a long time beauty industry enthusiast and no stranger to the beauty blogging world. My love affair with ...
END_OF_DOCUMENT_TOKEN_TO_BE_REPLACED

Get New Posts to Your Inbox Once a Week!